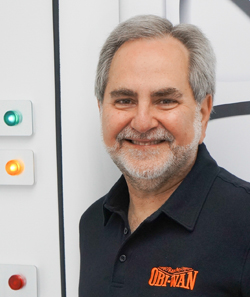 Steve Sansweet turned his passion for all things Star Wars into a second career, a huge collection, and friendships with hundreds of fellow Star Wars fans worldwide. He is now President and CEO of Rancho Obi-Wan, Inc., a non-profit corporation that is using that collection to educate and inspire.

Born and educated in Philadelphia, Pennsylvania, Steve majored in journalism. In early 1969 he became a reporter for the Wall Street Journal. After working in the Journal’s Philadelphia and Montreal bureaus, Steve was transferred to Los Angeles, where he became the Journal’s Los Angeles bureau chief in 1987, a position he held until 1996 when he became Director of Specialty Marketing at Lucasfilm Ltd. His title later changed to Director of Content Management and head of Fan Relations. Steve officially left Lucasfilm in April, 2011, but still freelances as their Fan Relations Adviser.

Steve appeared as co-host on more than 50 hours of Star Wars collectibles programming on QVC in the last half of the 1990s and has done numerous television and online interviews about his passion for Star Wars.

Not abandoning his love of writing, Steve has written or co-authored 19 books, 17 of them on Star Wars, including The Star Wars Vault, the 1.2 million-word Complete Star Wars Encyclopedia, Star Wars: 1,000 Collectibles – Memorabilia and Stories from a Galaxy Far, Far Away and Star Wars: The Ultimate Action Figure Collection. In addition to being the saga’s top collector—as Certified by Guinness World Records—Steve is a recognized authority on all things Star Wars, from the making and marketing of the movies and spin-offs to the activities of fans worldwide. He also has served as a columnist for official Star Wars magazines and blog for the official site, StarWars.com.

Steve helped build the first editorial team that created StarWars.com. Starting in 1999, he played an integral role in the launching of Star Wars Celebrations, the official fan conventions that attract tens of thousands of enthusiasts from around the globe. In this capacity, he has served as stage host and panelist, and even officiated at commitment and marriage ceremonies for fans expressing their love through Star Wars. Steve is a proud member of the 501st Legion, a worldwide grassroots fan costuming and service organization, and an honorary member of many other fan groups.